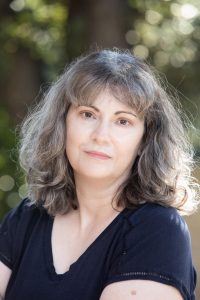 Martha Wells has been an SF/F writer since her first fantasy novel, The Element of Fire, was published in 1993. From the beginning her work has attracted attention and award nominations.  Her first novel was a finalist for the Compton Crook/Stephen Tall Award in 1993, a runner-up for the 1994 Crawford Award, and a 2003 Imaginales Award nominee for the French edition, Le feu primordial. Her third novel, The Death of the Necromancer, was a 1998 Nebula Award finalist.

Her novels include her longest-running fantasy series, The Books of the Raksura (five novels and two short fiction collections), which was a Hugo finalist in 2018 for Best Series; The Death of the Necromancer; and the Fall of Ile-Rien trilogy. Wells has also published three media tie-in novels: Stargate Atlantis: Reliquary, Stargate Atlantis: Entanglement, and Star Wars: Razor’s Edge. She also wrote the Magic Story for the Dominaria expansion in 2018 for Magic: The Gathering. Her first young adult fantasy, Emilie and the Hollow World, was published in 2013, with the sequel, Emilie and the Sky World, following in 2014. Her short stories have appeared in publications including Realms of Fantasy, Lone Star Stories, Lightspeed Magazine, Tor.com, and Wired Magazine, and in such anthologies as Elemental, Tales of the Emerald Serpent, The Other Half of the Sky, The Gods of Lovecraft, and The Nebula Awards Showcase 2019.

Wells also has contributed essays to the non-fiction anthologies Farscape Forever, Mapping the World of Harry Potter, Chicks Unravel Time, The Kobold Guide to Magic, and The Writer’s Book of Doubt. Also notable in the non-fiction arena is her toastmaster address at the World Fantasy Convention in 2017. Her speech, called “Unbury the Future,” about marginalized creators in the history of science fiction and fantasy, movies, and other media, and the deliberate suppression of the existence of those creators was well-received and generated a great deal of discussion.

Good news for Martha Wells and Murderbot fans—in April 2021, Tor.com publishing announced that they had signed a deal with Wells for six books, including three more Murderbot Diaries!

Wells has been praised for the complex, realistically detailed societies she creates; this is often credited to her academic background in anthropology. As an aspiring writer Wells attended many local writing workshops and conventions. She has also taught writing workshops at ArmadilloCon, WorldCon, ApolloCon, and Writespace Houston, and was the Special Workshop Guest at FenCon in 2018.

Her books have been published in 22 languages, and on October 19, 2022, she was made a member of the Texas Literary Hall of Fame. Now we are proud to have Martha Wells as the COSine 2023 Guest of Honor … take advantage of the chance to hear her speak, be interviewed, participate in panels, and get your favorite Martha Wells books signed! 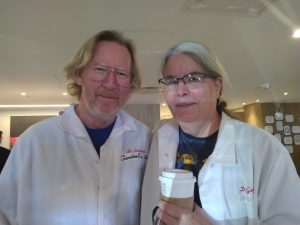 Louise and Jim Gunderson have been working on Artificial Intelligence and robotics for decades. With PhDs in Systems Engineering and Computer Science, the Drs. Gunderson have an ideal perspective on the technology and the impacts of the AI revolution. Their first foray into AI was an early 1990s program to play the game of Go, which was ranked in the top 6 in North America for several years—which might be surprising since neither of them play Go. Their current focus is on representing meaning in a machine such that it can be effectively used by a cybernetic brain.

They are the authors of dozens of technical papers and the book “Robots, Reasoning, and Reification,” (used to torture graduate students) and have done international presentations on topics ranging from the social effects of AI to a TEDx presentation on consciousness and robotics. Holders of multiple patents, their focus has always been on applications of the theories they develop—“What good is a robotic brain, if it can’t do something useful?”

They met cute in San Francisco 40 some years ago—what could be better than a first date conversation ranging from witchcraft to gravitational field theory?—and have been doing science stuff ever since.

The Drs. Gunderson are longtime residents of Colorado, are Extra Class Amateur Radio operators, and can occasionally be found on the eastern plains chasing tornadoes. They currently live in Pueblo, which gives them a great location to focus on developing a functional Artificial General Intelligence Engine, do work for their clients, and have time to take long walks along the river. 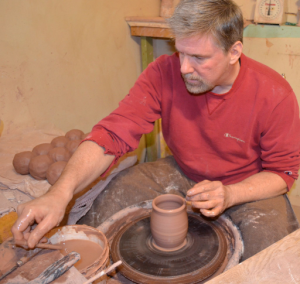 Kyle Crutcher, COSine 2023 Artist Guest of Honor, was introduced to ceramics in high school. He earned his BFA degree in Studio Arts from CU-Boulder. Kyle started selling professionally in the mid-80’s. He worked for Van Briggle Art Pottery in Colorado Springs, and then his former high school ceramics teacher. Kyle taught art at the high school and elementary levels and now teaches at Pikes Peak State College (PPSC). His art is featured at many stores and galleries across Colorado, including the Green Horse Gallery in Manitou Springs, CO.

I’ve known Kyle Crutcher since around 1991. I met him through the Society of Creative Anachronisms (SCA) where he was one of my favorite merchants, who spent windy nights sleeping in his truck at events. I still have Kyle feast gear from the early ’90s. At one point, we worked together (not at my current school). Over the years, I would see him at Colorado College (CC) art shows. Occasionally, I convinced him to pack up and walk down to the Japan America Society’s holiday party downtown after the CC art show closed.

One fateful day, I mentioned that COSine, our new SFF convention, had a heavy SCA crossover and that his art would probably sell well there. In 2006, he started showing at COSine and is now one of our top selling artists! COSine was his first science-fiction/fantasy convention, which has led him to show at many other conventions, including MileHiCon, Mythcon 46, and the late StarFest.

Kyle is multi-faceted! He is my favorite bass singer and I love hearing him perform. He has an exuberant puppy, Reggie. His pottery ranges from utilitarian stoneware to decorative raku pieces. We love our Kyle mugs and butter keepers (to have room temperature butter). One of his former PPSC students stops by just to hold the Kyle mug on my desk. Kyle’s art has branched out from being the gold standard of SCA feast gear, to encompass the COSine rocket (at registration … with lights!), clay-bots, Monoptozoids, and the alien train set that you can see in the COSine Art Show!

I am thrilled to have Kyle Crutcher as our Artist Guest of Honor at COSine this year. Be sure to check out the COSine Art Show to see buy his new rockets, robots, and Monoptozoids! 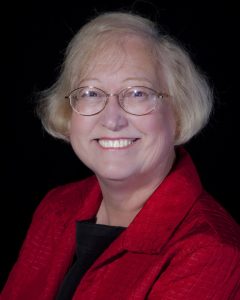 Connie has been an integral part of COSine for most of its history. Connie was our guest of honor in 2007 and has been our special guest, along with husband Courtney, every COSine since 2012.

Connie is seen everywhere around science fiction conventions – speaking on a discussion panel, dining with a table full of other authors, doing a reading, or winning an award. Sure, she’s one of the most awarded science fiction writers working today; with eleven Hugos, seven Nebulas, an induction into the Science Fiction Hall of Fame, and named as a Grand Master by the Science Fiction Writers of America, but Connie is not one to rest on her laurels. She’s out there, encouraging, teaching, sharing her stories, and being an invaluable part of the science fiction community.

Here is what Connie has to say about writing science fiction:

I first fell in love with science fiction at age thirteen, when I read Robert A. Heinlein’s Have Space Suit, Will Travel. That’s not unusual. Science fiction and adolescence have a lot in common: love of adventure, love of ideas, boundless enthusiasm for the universe. For many readers, it’s only an infatuation, but for me it has turned into a lifelong love affair, I think because the medium of science fiction is ideal for the stories I want to tell and the themes I want to write about.

I find that looking at things obliquely, through the disguise of other places, other times, cuts through not only the reader’s prejudices and defenses but my own and makes it possible to look clearly at our own world, our own faces. And the conventions of science fiction—Martians, time travel, robots—carry within them the themes that matter most to me. Time travel, especially, with its built-in resonances of grief and loss and regret, I could write about forever. After all these years, I still come to science fiction with that same shock of joy and recognition that I did at thirteen. 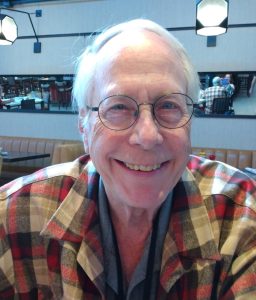 Dr. Courtney Willis, fondly known as Doctor Science, has made an art of demonstrating scientific principles in a fun and engaging way. He presents to avid audiences at science fiction conventions throughout Colorado. As one of our special guests over the years, Courtney has taught COSine members how to measure the circumference of the earth, about science apps for your phone, magic tricks with science, when science got it wrong, and even gave us a scientific literacy quiz. (Yes, there actually WAS a quiz!)

Convention-goers are far from the only people to benefit from his teaching. Over the last fifty years, he has coached and guided thousands of young minds at both the high school and college levels. He taught everything from introductory physics to acoustics and Teaching Methods of Science. Recently granted emeritus status by the University of Northern Colorado, where he taught for twenty-six years, Courtney enjoyed most the calculus-based physics classes. It was fun, he says, “to see a student light up in class.”

Isaac Asimov’s The Universe is the book he most often gifts to others, including his students. Its themes of scientific progression and man’s understanding of the universe resonate with many kinds of readers. Over the years, he says, he talked about the book so much that “Connie finally found a hardback of the book and had Asimov sign it to me. I treasure the book not only because Asimov signed it shortly before he passed, but also for its content. Asimov kind of connects Connie and me as he is both a science fiction writer and a scientist.”

His advice to students of any kind, science, education, or authors, is to ask questions and do research. “Really do your homework. There is a lot of science on the Internet (its original purpose), but when you get to certain specifics, go to books, to sites.” And to himself? He would keep journals of his everyday life. I’d say that would be a great read.